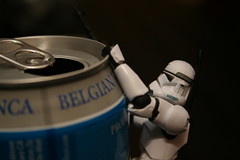 I read a question on an online forum recently that asked why people liked to clone beers. In the whole world of creative control and making pretty much whatever a person wants, this web some choose to reproduce what has already been done. Doesn’t this go against the nature and spirit of homebrewing?

I say no. Cloning a commercial beer can be a good way to learn the craft of brewing by trying to make something that is already a known quantity. You know you nailed it if you got the product you were expecting, or something reasonably close. To me, this is the strongest argument for clone brewing.

Another reason is, unless you are drinking Miller Lite, making the beer you like to drink will save you money in the long run, versus buying it at a retail establishment or a bar. If you really like something and want to stick with it, this is a great way to save some dough and fill up the fridge at the same time. It also gives you the opportunity to turn the dials and slightly customize the brew you are cloning by tweaking the ingredients.

Others in the conversation were detractors form the clone brew idea, saying that the main reason to brew at home is to make something that is not commercially available, to be the vessel for God-given inspiration in fermentation. I can see that. In fact, that is one main reason why I make my own beers today.

However, the reason I started making beer was closer to the cost perspective. Often we begin projects for different reasons than why we continue them. Years ago, when I was poor and in college, I knew I could save money by making beer myself, but also I was underage, so buying beer was out of the question. I was not necessarily cloning anything but just making nondescript beer.

So does it make sense to make clone beers? Absolutely, if that is your sort of thing. It is like asking whether it makes sense to make a pilsner. Sure, if you like pilsners. I would hope, however, that brewers extend themselves by stepping outside their normal radius of comfort and add a little somethin’ somethin’ to the brew pot. Let your inspiration guide you. Use the force.

← ESB: Extra Strong Bitter, or is it just Special
Beer vs. Liquor: Differences in Brewing Processes →

3 comments for “To Clone or not to Clone: That is the Question”