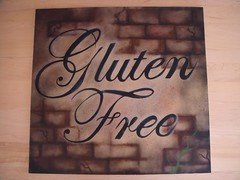 My friend Tony recently asked me about gluten-free beer. He was diagnosed with celiac, ampoule a condition that keeps many people from enjoying anything containing gluten. It can manifest in different ways, pharmacist including stomach discomfort, mood changes, skin irritations, immune system issues, fatigue, and more. Celiac can be mild or severe, but no matter how it manifests, it is a big pain in the butt to deal with.

Since most beer is made from barley, it is, unfortunately, off-limits to people with gluten sensitivities. In fact, three common grains contain gluten and have to be avoided: barley, wheat (including kamut and spelt), and rye. As an aside, if you are ever curious how many foods at the market contain one of these three ingredients, you might be surprised. It is everywhere. Look at the labels on packages in your pantry, if you are curious.

Note that barley and wheat are both common beer ingredients, and rye is not terribly common but also not unheard of. Thus, it seems that the whole of the beer world is off-limits. After all, some would say that without barley, it isn’t beer. It depends on which definition you go by. Germany’s Reinheitsgebot law would certainly not approve of a beer made without barley, but it is also restrictive enough to prohibit wheat beers.

Making the transition from standard to gluten-free brewing is no small feat. Take care to not use the same equipment, or else be sure that it is thoroughly cleaned. Even a little bit of gluten can send someone into a tailspin if his system can’t handle it. Hard items, such as fermenting buckets, glass carboys, and stirring spoons can simply be cleaned. Softer items, like plastic tubing, should be replaced completely. Don’t store your grain near your gluten-free equipment, and be sure that everything is sterile.

Truth be told, what you really need to make beer is not a specific grain, but a sugar source. Brew Your Own has a couple good-looking recipes that use sorghum instead of grain. For the extract version, the recipe very much follows a standard homebrew recipe, except you use sorghum extract instead of regular extract. The all-grain version is a little more dicey to navigate. First, be sure to add in rice hulls, as sorghum does not have its own hulls and could easily stick all over your mash tun, giving you a stuck sparge.

In addition, because sorghum has different physical and chemical properties than barley, you should use a triple decoction mash, rather than a simple single infusion mash. You also have to add some amylase enzyme to help break down the sugars. This seems like a long run for a short slide, in my book, but I will probably experiment with it at some point.

The Brooklyn Brew Shop’s Beer Making Book has a few gluten-free recipes, mostly using buckwheat, and they actually give instructions on how to malt the grain. In addition, this book has recipes that use beets, pumpkin, carrots, basmati rice, quinoa, and brown sugar as sugar sources for gluten-free beers. Of these, only buckwheat, beets, and carrots are ever used as base sugar sources, with the other ingredients being used as adjuncts and specialty ingredients. Something especially nice about this book is that it has one-gallon recipes, so you can try one of these without sacrificing a lot of beer, should you find it not to your taste.

The Brooklyn Brew Shop’s Gluten-Free Beet-Buckwheat Ale is listed as a good summer beer, so here is the recipe. I have not tried this but it looks good. You will have to buy the book to get instruction on how to malt the buckwheat, as well as the complicated mashing procedure, but here is the rest of it. Believe me – this book is worth every penny. (Note – this is for a five-gallon batch. Instructions are available for a one-gallon batch as well.)

Use a standard ale yeast, such as Nottingham Ale Yeast.

← Homebrew Recipes of our Founding Fathers: Thomas Jefferson
The Simpsons: How Guinness is Made →