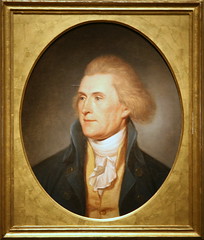 To wrap up our Independence Week theme of homebrew recipes of our founding fathers, let’s take a look at Thomas Jefferson. Jefferson was a brewer, in addition to being very intellectual and a renowned supporter of scientific study. However, he claimed not to have a real recipe he followed to make his beer. I find this curious, as it seems contrary to the practice of science, which he so adored.

On being asked by former governor James Barbour for his recipe, Jefferson responded:

I have no reciept [sic] for brewing,” Jefferson replied, “and I much doubt the operations of malting and brewing could be successfully performed from a reciept. If it could, Combrune’s book on the subject would teach the best processes: and perhaps might guide to ultimate success with the sacrifice of 2. or 3. trials. . . . We are now finishing our spring brewing. If you have a capable servt. and he were to attend our fall brewing, so as to get an idea of the manual operation, Combrune’s book with a little of your own attention in the beginning might qualify him.

“Combrune’s book” was The Theory and Practice of Brewing by Michael Combrune, and a leading text of the time on the subject of making beer. The link to this book will allow you to download the text in various formats, so you too can become an 18th century brewing expert.

So let’s assume that Jefferson, indeed, had no written recipe for his brew. He must have had it memorized. I simply find it hard to believe that he did not have a regular method for engaging in this singular scientific pursuit. The purpose of not writing it down, it would seem, would be to preserve a secret or proprietary element of it, whether ingredient or process. However, he was willing to let people come observe everything, so keeping a secret could not have been the reason for not recording it. Perhaps this will simply remain a mystery.

Since we do not know exactly what Jefferson’s recipe was, we have to go on educated guesses. The first is reported to be from the book The Homebrewer’s Recipe Guide by Patrick Higgins, Maura Kate Kilgor, and Paul Hertlein:

Another approximation of what Jefferson might have brewed comes from Randy Mosher’s Radical Brewing:

Either of these homebrew recipes is sure to give you an interesting brew, and by making your own beer you are celebrating freedom of choice, not having to settle for what corporations think you want. Stand up for your freedom to drink great beer that is specially handcrafted to your taste!

6 comments for “Homebrew Recipes of our Founding Fathers: Thomas Jefferson”