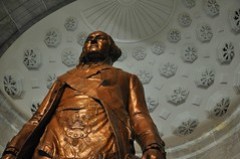 This week here in the U.S. we celebrate our freedom from British tyrannical oppression, there and what better way to do it than by celebrating our founding fathers’ homebrew recipes? We certainly owe a debt of gratitude to the British for our shared culture and often intertwining histories, even if it took a war to separate us, and also for our beer styles. Andy wrote a few months ago about the characteristics that make our American styles different from their British counterparts. Let’s look closer at what some of our national heroes made and drank.

Keep in mind that back in the day, beers were not just consumed for sport and pleasure, as they are now. They were very practical beverages made by boiling water, which was necessary in the days before water treatment plants, and flavored with various different things, such as hops, herbs, and sometimes even spruce tips, to make it palatable. You could make lots of beer at once, store it, and the hops and alcohol would prevent bacterial infection.

The New York Public Library has an original hand-written beer recipe from George Washington. It reads:

Take a large Siffer [Sifter] full of Bran Hops to your Taste. Boil these 3 hours then strain out 30 Gall[ons] into a cooler put in 3 Gall[ons] Molasses while the Beer is Scalding hot or rather draw the Melasses (sic) into the cooler & St[r]ain the Beer on it while boiling Hot. let this stand till it is little more than Blood warm then put in a quart of Yea[s]t if the Weather is very Cold cover it over with a Blank[et] & let it Work in the Cooler 24 hours then put it into the Cask — leave the bung open till it is almost don[e] Working — Bottle it that day Week it was Brewed.

I have read accounts of people trying to recreate this brew and finding it completely undrinkable. I am not surprised about this at all. Tastes changeover the years. Look at some of the food recipes from back then. Duck entrails  and goose tongues stuffed in boar pancreas, sheep offal stew – they ate all kinds of crap back then. Likely this beer recipe was made for a different palate than we have today.

If you want to try this recipe at home, you can use a 10:1 ratio of hoppy boiling water to molasses. So to make five gallons of this brew, use five gallons of boiling water and half a pound of molasses. This method is similar to the method I used for the Irish stout and English brown ale homebrew recipes I made before. Pour the boiling water on the extract (molasses in this case), mix thoroughly and violently, and when it is cool enough, add a packet of ale yeast. Nottingham Ale Yeast would work fine for this, I suspect. Instead of boiling the hops in the water, you can also just make it easy and put them in the fermenter with the molasses and pour the boiling water over all of it.

Strength is in your heart and your palate, I say. Go forth, my fellow Americans, and celebrate America’s independence in fine form with fine brew.

1 comment for “Homebrew Recipes of our Founding Fathers: George Washington”