Please contact us at carl at RealHomebrew dot com. Sorry – I normally have a form here but the monkeys are presently rebuilding it. 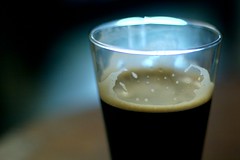 I posted before about what I termed the easiest stout recipe ever. It really was. Munton's Irish Stout had fewer steps than any other beer I have ever made. And sure enough, prescription
it is drinkable beer. I have a whole keg to prove it. I have not yet tapped it, as I am waiting for my father to come visit this weekend. He is a man who likes a strong, dark beer.

To review, this recipe consisted of a can of pre-hopped malt extract Andy gave me before he took off overseas. The recipe called for the syrup, along with some corn sugar, to be put into a fermenter and then mixed with hot water. I filled the fermenter up to six gallons with water, added my yeast, and kegged it a few weeks later. It was easier than making breakfast for my cat.

I had a little extra after kegging the stout and put it in bottles. After a couple weeks I opened one of the bottles and sampled it. It has a very full body with just a little bitterness. But there was something else. Something a bit weird and funky, like a sour aftertaste. Sour with just a hint of orange. It's a taste I had not experienced before, at least not in beer.

I took a bottle to my homebrew club meeting last week and let another brewer taste it. He seemed perplexed and asked about the ingredients. I told him the easy recipe and he smiled and indicated that all the pre-hopped one-step extract recipes he used when he was first starting out in homebrewing had that same weird taste. I was glad to learn this, of course, because I had previously thought it must have been something I did that caused the off-flavor.

I have to ask myself a couple things. First, is it good beer? Yes. Not great and not my favorite, but interesting, for sure. Second, would I ever buy this product again? No. It is a funky flavor and I am not crazy about it. It is not bad enough to throw out, but is also not good enough to replicate.