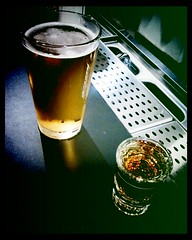 I started talking to Andy about beer cocktails and we decided that we should broach this subject. Neither of us could honestly say that we had had a beer cocktail when we spoke of them, stuff but it occurred to me later that probably we both had, without even categorizing it as such. The one I am thinking of? The black and tan. Here is a list of beer cocktails I asked friends to send me ideas for. Do you have a favorite? What should we add to the list?

The Gentleman shot of rum in a stout.
Bloody beer
Dark ‘n Stormy – Dark Rum + Ginger Beer = Dark n Stormy. This may be a case of close, but not really, as I’m sure ginger beer could be up for debate depending on how it’s made. I think there are some versions that are fermented, but most found around here are not.

No doubt you have seen various beers advertising that they are wood aged and others that they are barrel aged. These two terms, which seem like they should be synonymous, actually mean two different things. This is on my mind right now because I am getting ready to make a wood-aged beer probably next month.

Barrel-aged beer has the connotation of an old-world style of beer aged in old whiskey barrels, and wood aging sounds an awfully lot like that, but again there is a distinction. Are the manufacturers trying to mislead you into thinking their beer is hand-crafted and absorbs a subtle wood flavor the way their great-grandfathers' beer did? Perhaps. Marketing with the term does look to me like a sleight-of-hand trick. However, that does not mean that all wood-aged beers are bad. Consumers just need to know the difference.

It may seem like I am talking down about wood-aged beer. That is not my intention. Whatever a person has to do to get the recipe right and make great beer is worth doing. Wood casks are expensive, and barrel aging is tricky, compared with keeping beer in giant stainless steel tanks. It is easier to manage the ingredients you put in the fermenter than it is to manage the barrels you put the beer into.

The Impact for Homebrewers
All this said, what is a homebrewer to do if he wants that barrel-aged flavor? You can buy oak and other types of wood chips at your local homebrew store that can help with this. Don't buy wood products from a hardware store because they have likely been treated with various chemicals for industrial use. You can also buy barrels from various homebrew stores. They are not always available and when a store happens to get some, they tend to go quickly. So if you want to try barrel aging, keep your eyes open and act quickly.

I am planning to make a wood-aged Scotch ale in a month or so and will post the recipe once I get into it. When I do, I will use oak chips. First step is to soak them in whiskey for a couple weeks to really get that whiskey-infused flavor. This does more than impart a great flavor. It also sanitizes the oak chips, ensuring that I don't infect the beer with whatever bacteria might be living on the wood. This will all be done in the secondary fermentation step. I have done wood aging with wine before with great success but have never done it with beer and am excited to get my hands dirty with it.

Have you ever tried this process? What tricks do you have to make it successful?