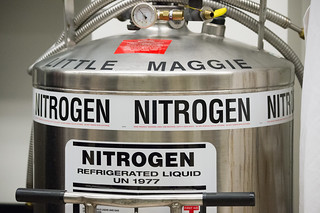 I just opened up the newest Zymurgy magazine and found a letter to the brew professor claiming that nitrogen is inert, search and thus could not be responsible for the off-taste the professor has experienced. Here is my response I just sent:

I have to comment on the letter I read in the Sept/Oct issue of Zymurgy in which the writer claims that the off-taste you associate with nitrogen could not be from the gas because nitrogen is inert. In fact, it is not inert. Only the noble gases are inert, and nitrogen is not among that group. Granted, it may not be the nitrogen causing that flavor (never experienced that myself), but that gas is definitely ert. Or reactive. I guess that is the correct term.

Yes, nitrogen is reactive. Perhaps there is nothing in the beer or hardware that it will react with, but it certainly can react. Think of nitrous oxide, which is essentially beer you can inhale. That is made up from nitrogen and oxygen. Just setting the record straight.