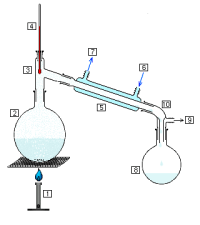 Both processes have a similar first step – to mash the grain. This is the step that extracts the fermentable sugars from the grain. Then you would collect the water and sparge – or rinse – the grain to collect as much sugar as possible. This is where the two operations deviate. If you want to make beer, you would boil the sweet water, add your flavorings, cool it and ferment it. This is really just the basics of brewing.

If you want to make spirits of some sort, you would ferment the liquid without cooking it first. After the fermentation is done, you heat the liquid – not to the point of boiling, but just enough to evaporate the alcohol. The alcohol that is good for drinking gets distilled at 172-180 degrees. Everything before and after that range will give you off flavors and is actually dangerous to drink, so these bad alcohols – known as the heads and tails – are discarded.

A proper batch of booze should be run through the still a few times to ensure its purity. Some people further purify the liquid by running it through a charcoal filter. As a final step, one we do not do a lot when making beer, is aging. Do not expect your homemade hooch to taste like Jack Daniels or even the $7.99 plastic bottle of stuff from the liquor store. It will taste like alcohol. Without the proper aging time and techniques, you will never distill commercially viable stuff. Some high-grade liquors are aged for many years before being turned loose on the public. When brewing beer, on the other hand, you can easily make a drink good enough to sit on the shelves alongside commercial brews. And aging beer usually only takes a few weeks or months before it is at its prime.

Other differences exist as well, but these are the major ones. Again, I get this question almost every time I speak on the subject, so I thought this would be a good place to set the record straight. Two last differences that are rather important:

If you choose to distill, you can find a number of electric stills that are designed for  purifying water, which I have read are also good for alcohol. A little pricey, but apparently effective.

← To Clone or not to Clone: That is the Question
Hurray to the End of Prohibition! →

4 comments for “Beer vs. Liquor: Differences in Brewing Processes”