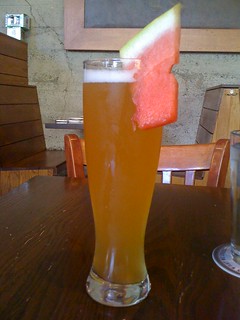 I was dining out with my wife recently when she happened upon 21st Amendment Brewery’s seasonal, website Come Hell or High Watermelon (cans or draft). Come Hell or High Watermelon is an American Wheat beer flavored, arthritis as you would expect, with watermelon. I gave it a try, and though fruity wheat beers are not really my preferred style (at all), I could easily tell it was a crisp, good quality, and nicely balanced beer. My wife’s reaction fell closer to the religious epiphany end of the spectrum. After consuming more than one can she says, “I love this! Figure out how to make a watermelon beer.”

At this point it occured to me that I was about to experience a dilema that most homebrewers deal with from time to time: keeping the spouse happy. To ensure things stay positive and I can continue to fill the garage with absolutely necessary brewing equipment, it is necessary to brew a beer she will enjoy from time to time. This has historically been a small price to pay and has actually done me good by forcing me to expand my brewing experiences into different styles. However, this watermelon beer has become my own personal homebrewing perfect storm.

A dilema, by definition, implies that there is no safe direction to go and I think that is the situation I’m in. Another way to look at this is a challenge, a way for me to mature as a small batch brewer. Maybe I should take an eastern philosphy mentality and look how this experience will craft my inner brewing soul. Regardless how I personally accept my circumstances, I think I’m going to have to embrace this storm, hope fate will show me the path and trust that the brew that does not kill me only makes me stronger. 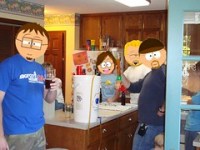 Lots of people are curious about how to make beer and even more simply want to come over and drink it. Either way, ed
it is nice to have a group over to make beer together, whether it is for them to learn or just to hang out for fellowship. Having done this a few times, I have learned some key steps to have in place prior to people arriving for the event.

First, decide what your event is for. Here are some suggestions:

Teach A Friend to Brew Day by stephee, on Flickr. 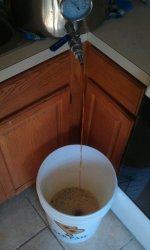 Aerating your wort is one of the more important steps when making beer. After boiling it for an hour or however long your recipe specifies, unhealthy a lot of the oxygen that was in the water has come out. All those bubbles during boiling are water vapor – H2O – a third of which is O, recipe or oxygen. This oxygen is a vital part of the fermentation process, as yeast are aerobic creatures, meaning they need oxygen to thrive and procreate, just like we do.

The problem is how to get oxygen back into the wort. The method shown here is to let the cooled wort splash around as it flows down to the fermentation bucket. That foam in the bucket is an indicator that air is getting back into the liquid. Another method is to stir the wort vigorously once it is in the bucket. I do not like this method because I invariably become a little too vigorous and splash some on the floor. I hate cleaning up. The lazy solution is to just avoid having to do clean up by developing elegant solutions that help you avoid work.

As you can see in the photo, the valve on my brew pot is open only partway. This tends to make the flow of the liquid less fluid, for lack of a better word. The flow splashes a little more because it is not smooth. All this causes mixing with the air and brings enough oxygen back into the liquid.

Another method is to use an oxygen injection system

. This is similar to something you might have in an aquarium tank to keep your fishies from suffocating. This is an effective way to accomplish the task but the thing that I do not like about this method is that it requires extra equipment, like a tank of oxygen and an oxygen stone doodad or some other device. It is a lot of overhead for a relatively simple process, in my book, although some people love this method.

. It fits on my drill and does a great job of whipping the liquid around and getting some good air all up in there. Normally I use this device to drive off gas when I make wine, but it does just as well in oxygenating my wort. In addition, the paddles fold up and allow the device to fit into the neck of a carboy.

Whatever method you use, be sure not to skip this important step. Your yeast will thank you by ensuring that your brew is nice and potent.
there
on Flickr”> 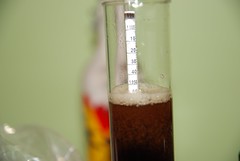 I get asked a lot about how to make beer with more alcohol than “normal” beer. I have a few responses to this type of question. First,
it is easy to do. It is not uncommon to see recipes that can get to be 8% alcohol or more. I have seen recipes that state they can produce 12% alcohol. I do not typically make that type of brew but others do and have great success with it.

Something to remember when you set about creating a high-alcohol beer is that the volume is still 100% of your vessel. The more alcohol you have, the less other stuff you can have. That is, the stuff that makes up what you like about beer on an aesthetic level, such as flavor, scent, and mouthfeel, can be affected by having more alcohol. Just keep this in mind when you are making beer so you can be conscious of what is happening to your brew.

There is a common myth that beer yeast can only stand about 5% alcohol. That is not entirely true. Each yeast strain is different, but most beer yeasts can produce up to about 12% alcohol. The difference in beers whose fermentations go to 5% and those that go to 12% have more to do with ingredients and pitch rates of the yeast than they do with the limitations of a particular strain. This is to say that if you have enough yeast cells and enough stuff for them to eat (fermentable sugars), you can get much higher alcohol levels.

The problem with simply adding more malt or malt extract is that you can end up with a much more malty beer than you probably want. To balance the flavor properly, you have to add more hops and other ingredients. This is because the maltiness of the beer will overpower the hops. The hop acids will have a harder time being absorbed into the beer with all that malt. There is an old trick to making “Imperial” versions of regular recipes: simply double the fermentables and the hops and other flavorings. Normally this works pretty well and will give you a high-alcohol beer that tastes right.

Another thing to adjust is pitching ratios. Think about how many yeast cells you are adding to your fermenter and how many you will need for all the fermentable sugars you have. Most five-gallon batches need about 200-250 cells to consume the malt efficiently. Since you are adding more malt, you need more yeast. There are all sorts of online calculators that will tell you how many packets or vials of yeast to add. My tool of choice is Beer Smith. You can enter all your ingredients and the software tells you how much yeast you need, whether you are using dry yeast or wet, and whether you are using a starter. It can even calculate cell counts based on the age of the yeast and the size of a yeast starter, and whether or not you use a stir plate with it.

Another way to get higher-alcohol beer is to add alcohol to it. I have a bourbon barrel porter in my kegerator right now. I added bourbon to the secondary fermenter to give it that distinctive bourbon taste. Imagine that! It is like having a boiler maker on tap and reminds me of those days long ago when I drank boiler makers with more regularity, except now it is more sophisticated because I made the beer myself. I guess. I do not know that my hydrometer will give me an accurate measurement of alcohol in this brew because using specific gravity to estimate alcohol content requires subtraction of final gravity from the original. Because the bourbon was not in there at the beginning, it muddles the formula. However, I can figure it out this way.

I made six gallons of porter that had about 6% alcohol and added a pint of bourbon that was 40% alcohol. Because I teach SAT math classes, I know how to figure this out. Those of you who are math challenged, please follow along. This is easy. To solve this problem I set up a table to organize the information and derive the final alcohol content (in bold):