Homebrewers, especially new ones, are overrun with various  acronyms and confusing ideas. One of the more mysterious is the Lovibond scale, as well as SRM and EBC equivalents. When we buy grain, it is quantified as being a certain number L or Lovibond. Beers are often referred to with an SRM designation. All this takes a certain amount of study to get used to.

Lovibond
The Lovibond scale, named after Joseph Williams Lovibond, is a scale we use in the US mainly for categorizing different colors of grain. It was originally developed as one characteristic to measure when assessing quality of beer brewed. In short, if the color is way off, chances are something about the recipe or process changed, and you got a different beer as a result.

Mr. Lovibond was inspired to make a gauge to measure beer color after visiting church and looking at the stained glass windows. His first beer colorimeter was a set of pieces of stained glass used to compare the beer to. There are limitations to this method, however. For instance, if you have a large sample of beer it can look darker than a small sample.Think about this like comparing a pint of beer to a shot glass of beer. The sample with less depth will generally look lighter. It also depends highly on a person’s vision and imagination. Medium-colored honey blondes might be easy to rate but as you get toward the darker and lighter ends of the spectrum, rating beers by color in this way gets a bit more difficult.

Eventually this method was discarded for beer but was kept on for categorizing different malts. You may see various malts at your homebrew store labeled 40° L, for example, and sometimes the L or the degree mark is left off entirely because brewers know what the number means. The way this scale works is the lower the number, the lighter the grain. So 40 L crystal malt is lighter than 60 L, mainly due to the length of roasting.

SRM and EBC
The Standard Reference Method, or SRM, and the European Brewing Convention, or EBC, are methods that both use a spectrophotometer to determine beer color. My knowledge of spectrophotometers is rather limited, although I did work at an engineering company that dealt with them and I reviewed specs on hundreds of different models. However, Brad Smith has a great explanation of all this and I would be hard pressed to come up with something this good:

Measuring Beer Color at Home
What? You don’t own a spectrophotometer or a bunch of pieces of stained glass? That’s okay. You are not dead in the water if you want to record your beer’s color. The BJCP is issuing color guides to its official judges, and you might be able to get one from them as well. Of course, if you are this interested in beer color, you should probably sign up to be a judge anyway. You can also purchase a beer color guide from BeerColor.com in a couple different formats, including a wallet-size one. That will be my Christmas present to myself this year, I reckon. 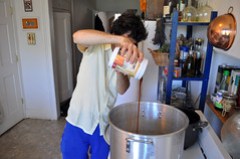 This homebrew recipe comes straight from the White House. Hail to the Chief!