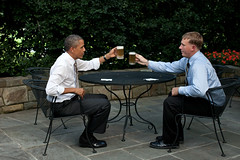 I have been avoiding this topic on purpose. First, order it’s that ugly political season and this is not a political issue. Partisan politics is good at driving people apart and beer is good at bringing them together. Whatever ills arise between people can often be soothed by a draught of beer and a cup of merriment. In fact, beer is so intertwined into the fabric of our nation that it cannot be neatly undone and cast aside. Beer is part and parcel of the American dream, a beverage whose roots are democratic, thus serving as a microcosm through which to view our nation, preferably while staring through the bottom of an upturned glass.

I have been accosted by a number of people suggesting that I be excited about President Obama being a homebrewer. I nod and smile but rarely share my real thoughts. Here they are, in no particular order:

That’s pretty much it. Let’s keep it non-political here and all just agree that White House homebrewing is a good thing. I can get behind a guy like that, who wants to experiment with new ideas and do something that has not been done before. Now the gauntlet has been thrown down. What kind of beer would Romney make?