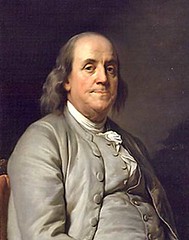 Benjamin Franklin’s own homebrew recipes may have differed from this a bit, as the terms and ingredients used way back when are different from what we have now. However, Tony Simmons has come up with a pretty good approximation of what Poor Richard’s Ale would be like if made today.

On a separate but related note, Ben Franklin is often quoted as having written, “Beer is proof that God loves us and wants us to be happy.” I read recently that this is not quite how it went, and that the quote was really about the rain, which makes the vines grow,  resulting in wine. I love wine and am delighted that the rain helps the grapes grow, but still believe that the sentiment behind the beer quote is true. Beer is like magic. God wants barley to become beer. Brewing is the very essence of creation, and a way for us to emulate deity on a microcosmic level. A brother and Renaissance man like Franklin would have known this well.

Old homebrew recipes, including George Washington’s, talk about ingredients that are hard for us to pin down. They refer to such things as low malt and high malt, and do not often discuss what type of hops and yeast should be used. The science and art of homebrewing has certainly advanced quite a bit over the years, and we have more than just low (light) and high (dark) malts. In fact, if you went to your homebrew store and asked for some low malt, they would look at you like you had three heads.

A happy Independence Day to you. Celebrate your freedoms with great beer and by throwing off the shackles that keep you tied to mediocre brew. Homebrewing is an exercise of the very liberty our founding fathers fought for. Here’s a toast to our freedoms!

3 comments for “Homebrew Recipes of our Founding Fathers: Benjamin Franklin”