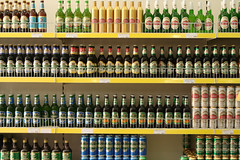 Andy and I often talk beer. Actually, we don’t, but that is because he is off in Afghanistan at the moment, where they don’t have any, and which is far away. I can’t just pick up the phone be like, “Yo Dawg, I heard you like beer…” I’d hate to talk beer with a guy who can’t have it. It’s like telling a starving person about food. There’s no fun in that for anybody. However, we had a brief email interchange recently about the commercial brands we enjoy.

As a rule, I don’t buy beer anymore at retail stores. Why would I? I make great homebrew for a whole lot less money. However, from time to time I get an urge for something in particular or see something new I want to try. I don’t dislike much when it comes to beer, but I don’t like a lot of what is available commercially enough to buy it a lot. I simply like my own stuff better. I am not saying I am a better brewer than the big companies have, but I know my own tastes better for sure. After all, like it or not, Anheuser-Busch has figured out how to make nearly flavor-free beer the same way in many breweries across the world. Call it piss in a bottle if you really dislike their product, but their ability to produce the exact same thing in all those different places is a technological marvel. You have to give them that, if nothing else.

Even if you never buy beer anymore, the fact is that you first cut your teeth on something. There is a beer out in the retail world somewhere that shapes your definition of what a great brew tastes like, even if it is to serve as what beer should not taste like. But at some point you went nuts over it, and that is why you are here now, stirring pots of brew like a witch in the Scottish Play.

Andy and I decided to share what our go-to brews are and would love to hear about yours as well.

What are your go-to commercial beers when you are out of homebrew or out on the town?

2 comments for “Commercial Beer: What We Like to Drink”