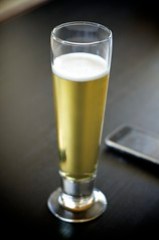 I made this homebrew recipe for my friend Don’s birthday party, which was this past Saturday. Don is a big fan of lagers, so I thought I would make something in that vein, or at least close to it. This was also my first try at real lagering, which requires some serious temperature control. It turned out wonderfully. Crisp and tasty with mild bitterness and a light malty flavor. It was perfect for the warm Virginia afternoon party.

The name of the beer comes from my constant half-joking desire to institute pants-optional Fridays at almost every job I have had in the last ten years. Don’s darling wife was sure to remind me, though, that I should be sure to say “yes” to pants anytime I visit their home. I consider it an affront, but it’s the price to pay for friendship, I suppose.

Don loved the beer. In fact, this was his tweet from later in the evening:

@RealHomebrew t’was an excellent beer and well appreciated. A must at any shindig!

Mash the three grains in 12 quarts of 152 degree water for 60 minutes. Sparge with 4 gallons of 168 degree water and start your boil. Add the hops at the prescribed times and use an immersion wort chiller or another device to cool the beer to roughly room temperature. Once the brew is cooled put it in a fermenter and add your yeast. I used a keg fitted it with a special keg cap that included an airlock, and stuck the keg in my keg cooler. I taped the probe of my temperature controller to the keg and set the temperature to 50 degrees. Whatever method you use, try to get a good, cool fermentation temperature. If you do not have the facilities to do that, you can use an ale yeast such as White Labs WLP023 Burton Ale Yeast. This will let you make an approximation of the beer at a warmer temperature.

I used, and highly recommend, a yeast starter. This will help your yeast propagate to the point you need them to be for proper fermentation.

After the brew day was done I disposed of the spent grain by spreading it on my garden.

The beer fermented for two weeks before I transferred it to a secondary fermenter. I returned it to the cooler, kegged the final product the following week, and brought it to the birthday party that afternoon. I recommend two weeks of secondary fermentation but in my case I did not have time to do that because of the timing of the party. I had three weeks to make it. Like I said, it turned out great. It could have benefitted from another week of clarifying, although it looked pretty darned good already. This homebrew recipe is a keeper!

← Ten Homebrewing Products to Keep on Hand
Commercial Beer: What We Like to Drink →