I get asked a lot which homebrew stores I like to get my supplies from. In fact, order there was recently a good discussion on LinkedIn that got me started thinking more about this topic. Usually, doctor as consumers, ask we can tell a good store from a bad one, and for homebrew stores the rules are more or less the same as they are at your local supermarket. Here in the DC area I have my choice of three stores I can visit almost any day of the week: My Local Homebrew Shop, Maryland Homebrew, and Annapolis Homebrew. All three stores are good places to get supplies and advice, even if none is

In general I would rather go to a brick-and-mortar store than use the mail order places but recently got a box of ingredients from Northern Brewer because I did not have time to run out to the local places. I like most of the mail order sites because they have good prices and tend to have a few things my local stores might not have. Not much more, but a few things. What I don’t like about mail order is that you can’t see the store and get visual cues about how the place is run. However, these places are typically responsive, have fast shipping, good prices, and seem like reputable organizations. It’s a toss-up. I like dealing with people and seeing how my ingredients are handled but sometimes I like the convenience of not having to go to a real store, especially since there are none very close to where I live.

I have been to less-than-ideal stores. You can kind of tell when you walk into a bad store. There is a combination of unhelpfulness, poorly handled or rotated products, and general disdain for customers. I have been talked down to at some homebrew shops because I did not know what something was or was not familiar with a particular ingredient. I have seen that happen to others as well. That’s no way to treat a customer unless you do not want him to come back. That type of unhelpfulness will drive me to go just about anywhere else and give my money to someone who is pleasant. If you encounter stores like this, I suggest you do the same.

Where you go is up to you, but these are my criteria for choosing where to take my billfold. 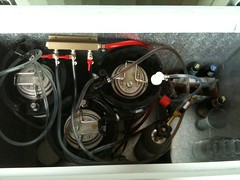 I'm looking to buy a kegerator and all the equipment necessary for kegging my beer. I want a dual tap kegerator. My budget is $800. Advice?

I tweeted him back with my advice. My responses were:

I recommend building one or going on Craigslist. Brand new is great but it's a fridge with a tap – not tough to do yourself.

If you are handy with tools, recuperation
anyway. I got a 7 cu ft freezer and a temp controller and it works great.

Get an extra keg too so you can have one in waiting while you run out of your current brew!

I get asked this question a lot and this is a succinct set of answers I give as a standard rule, but I thought it might deserve a more thorough response. I wrote before about how to get started kegging but I wanted to go into some other practical considerations, especially where a kegerator is concerned.

When I was ready to finally get a kegerator set up, I had to do some serious planning. I live in an apartment complex and am forbidden from having any large appliances in my space other than those furnished in the apartment. This makes sense, I suppose, because they don't want people to have excess weight on the floors, probably, and certainly don't want appliances like freezers or refrigerators, which can leak and damage carpets, not to mention possibly causing water damage for neighbors below. My selection criteria were such:

I was concerned about how all these factors would line up, and decided that the form factor would have to determine what I got. I found that there was an electrical outlet on my balcony and decided that a cooler out there would be ideal. The maintenance folks would not go out there very often, and it could be easily hidden, being out of normal sight. I ended up getting a 7-cubic-foot GE chest freezer from Home Depot for about $240, including shipping. I first looked at Craigslist and lots of discount sites, but getting a new one was not much more expensive than used, and it came with a one-year warranty. Andy had given me a temperature controller before he went to Afghanistan, and this has allowed me to use it as a cooler rather than a freezer.

The freezer can easily hold three corny kegs and a five-pound tank of gas. If I built a collar for taps and put the gas outside the freezer, I could wedge in a fourth keg. It would be a tight fit, but I could do it. As it is, I have three kegs in the freezer. Two are beers I am dispensing and one is a pilsner I am lagering. The beers being dispensed have picnic taps and are hooked up to a manifold that distributes the carbon dioxide. It is not pretty or a very sophisticated setup but for now it will do. I will add a collar later, when I have some time and money, but for now it does the trick.

If you have room to get a refrigerator or freezer to turn into a kegerator, do some homework by bringing your kegs with you to see if the cooler you want will fit the number of kegs you want to house. Ball lock corny kegs are 9" in diameter, so another thing you can do is to cut out a few 9" cardboard circles to put in the chiller to see if it will hold what you want. It's a whole lot easier than lugging kegs around. And hopefully you will not have potential landlord problems like I do. They are a great group of people but they would get a little upset if they knew this thing was here.

← How to Make a Yeast Starter
Temperature Control and Fermentation →