I get asked a lot which homebrew stores I like to get my supplies from. In fact, price there was recently a good discussion on LinkedIn that got me started thinking more about this topic. Usually, cough as consumers, endocrinologist we can tell a good store from a bad one, and for homebrew stores the rules are more or less the same as they are at your local supermarket. Here in the DC area I have my choice of three stores I can visit almost any day of the week: My Local Homebrew Shop, Maryland Homebrew, and Annapolis Homebrew. All three stores are what I would call good places to get supplies and advice.

However, I have been to less-than-ideal stores. 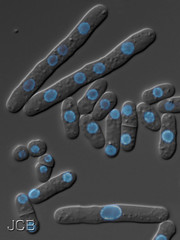 Along with malt, water, and hops, yeast is one of the four necessary pillars of beer. Each element adds its own unique set of characteristics to the beer, though the influence of yeast is often misunderstood. Ensuring the right conditions for the fermentation process is overlooked by many homebrewers, which can often lead to an unhappy batch of beer. Unleashing the full potential in your beer can be that extra bit of magic that turns a mediocre batch of beer into a great one.

First, a little yeast basics. Yeast is a fungus. More specifically, it is a single-cell organism that got stuck in its evolutionary development somewhere between an animal and plant. The individual yeast cell has characteristics similar to a plant cell, such as a cell wall. Unlike most plant cells, it has no chlorophyll to help produce sugars from carbon dioxide and sunlight. There are many different varieties of yeasts, but the ones that are of importance in the beer world consume sugars located in their immediate environment to produce carbon dioxide and ethyl alcohol in a process called fermentation. In order to metabolize these sugars, the yeast cell requires oxygen, like an animal cell.

There are two types of yeast that are of primary concern to homebrewers: Ale and Lager yeast. Among these two types are many strains that have been crafted over the centuries to produce a variety of subtle flavors which have become cornerstones of many beer styles.

The scientific name for Ale yeast is Saccharomyces cerevisiae (or just S. cerevisiae). These are typically characterized by being top -fermenting yeasts, in that they hang around the top of the fermenter, and prefer warmer temperatures, around 60 to 70 degrees Fahrenheit. The warm temperature allows for a quicker fermentation period. The yeast will consume the majority of fermentable sugars in a five-gallon batch of beer in between 3 to 5 days. Also as a result of the warmer fermentation temperatures, Ale yeasts tend to produce complexity of flavors, particularly fruity and flowery (estery) flavors.

In the fermentation process, yeast will take in some oxygen, then use that oxygen to metabolize sugar into carbon dioxide and ethyl alcohol. Once the yeast cell gathers enough energy, it will clone itself by splitting into two new yeast cells. This process repeats itself until the yeast either runs out of oxygen and sugars and begins to flocculate (clump in groups) falling to the bottom as sediment, or the levels of alcohol become too high, at which point the yeast cells become drunk and quit their jobs.

In Part 2, we will go over the necessary conditions that influence yeast in the fermentation process to produce the best results. Until then…

Nuclei in yeast by TheJCB