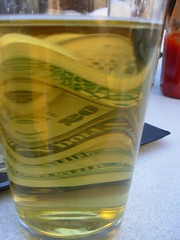 The cost of homebrew beer is something people often ask about when I talk about brewing. Isn’t it more expensive to make quality beers at home? My answer is always, “It depends.” There are lots of variables, depending on how much equipment you want to buy, what you want to make, and what type of beer you typically buy. Beautiful Girlfriend thought it would be interesting to make some comparisons on this subject, and I agree.

My homebrewing club  at Kena Shriners has been asked to make a batch of beer for another club, store and was given little direction on what type of homebrew recipe I should use. We did a little reconnaissance work and learned that this other club loves light lagers such as Bud Light, so I decided to make something similar enough that they would be familiar with it, but also different enough that it would be a bit more interesting than their usual brews.

I got this recipe from Brew Your Own, which labeled it "Your Father's Mustache." I have adapted the recipe a bit to accommodate for my timeframe and equipment. Specifically, I am using an ale yeast because I need the beer to be done and in a keg in a little more than a month. Making a true pilsner takes a bit longer than an ale because it requires a lager yeast, which ferments slowly, and at a low temperature.

Recipe:
Steep the specialty grain in 155-degree water for 60 minutes. Remove the grains and bring the wort to a boil. Add the malt extract and corn sugar and water to reach 3.5 gallons. Add the hops at the specified schedule. Cool to room temperature, add the yeast, and let it bubble away. If doing a single-stage fermentation, bottle it after 10-14 days. If doing two-stage fermentation, let it bubble in the primary for a week and then in a secondary fermenter for two weeks, and then bottle or keg.

The original recipe also had an all-grain version, using 9.0 pounds 6-row pale malt and 2.25 pounds of brewer's grits instead of the extract fermentables. Someday, when I have more time, I mean to make this all-grain homebrew recipe. If making this as a real pilsner, use White Labs WLP833 or Wyeast 2487 yeast.