Learning how to compost your homebrew waste is key in being able to harness the life still present in these raw materials. When I first started brewing beer at home I was shocked by the amount of waste that might otherwise go into the trash or down the drain. At the time I was living in an apartment and had no facilities for composting. This was the early 1990s and few people were thinking about how to compost to reduce their footprint.

Learning how to compost your homebrew waste is key in being able to harness the life still present in these raw materials. When I first started brewing beer at home I was shocked by the amount of waste that might otherwise go into the trash or down the drain. At the time I was living in an apartment and had no facilities for composting. This was the early 1990s and few people were thinking about how to compost to reduce their footprint anyway, website
so it wasn't really on my mind. When I moved into a house with a yard about six years ago, cheap one of the first things I did was build a compotst pile and started making my own rich, dark, beautiful soil for the garden.

The good news is that if you are brewing, whehter it is straight extract or all-grain brewing, you will have compostable byproducts. Pretty much any vegetable matter can be composted, including your spent grain, hops, yeast blanket at the bottom of your fermentation bucket, and even the cotton bag you use for specialty g

For our first style post at RealHombrew.com, dosage
I think it would be very appropriate to discuss the America’s biggest contribution to the beer world, cystitis
at least in my opinion, and a very good jumping-off point for homebrew: the American Ale. It is safe to say that the majority of beer enthusiasts have enjoyed an ale at one time or another. Despite the commercial popularity of pilsners in America, the craft brew community has brought about a rebirth of the American-style ale.

American ales are generally a bit more hoppy than their cousins from across the pond and often have a bit higher percent alcohol by volume (ABV). A great deal of the unique hoppiness is due to the floral and citrus characteristics of the hops grown in the United States, especially those developed in California and the Pacific Northwest. In addition to the increased hop characteristics, American ales are generally medium bodied with a lighter malt flavor than than European-style ales. Some of the more notable American ale styles are the American pale, amber, brown, and IPA.

Let’s get brewing! All the below basic styles are for a five gallon batch using liquid malt extract and hop pellets. Remember, American ales have slightly more hop characteristics than their European counterparts therefore the hops are important in setting the American ale apart. Look for U.S. domestically grown hops for your American ales. Though I use domestic hops as a guide, their use is not by any means a hard rule. Feel free to substitute the hops with other hop varieties with similar Alpha Acid Units (AAU) to meet your personal taste or hops availability. You can use any ale yeast of your choice for fermentation. For the below styles, I recommend fermenting for at least two weeks before bottling or kegging, though fermenting for longer periods is often preferred.

If you are worried at all about clarity in any of the above styles, try adding 1 teaspoon of Irish Moss to the last 10 minutes of the boil.

The American Ale styles are easily adaptable to your particular homebrew tastes. The American pale and amber ales can also serve as a great base to develop various seasonal and fruit beers. For instance, try reducing the bittering hops in the American Pale Ale recipe to 1.0 ounce Cascade hops and adding 10 pounds of well washed and chopped strawberries to the fermenter for a nice strawberry ale. Enjoy your personal style of American Ale!

Use two 3.3 pound cans of pale malt extract.  Boil 2.0 ounces Cascade hops (2.5 oz for a slightly more bitter flavor) in the wort for 60 minutes.  Add an additional 1 oz Cascade hops in the last 5 minutes of the boil.  This will give you a classic American Pale Ale style.

American Brown Ale.  The American brown ale should have a bit more toasty and nutty notes than the lighter American ales.  It should have a brown to dark brown color.  The nutty flavor and darker color is achieved by adding specialty grains to the boil.  It still keeps to the American Ale style by having higher hop characteristics than a brown ale you would find in England.

Start with two 3.3 pound cans of pale malt extract.  For the specialty grains, steep 0.5 pounds milled 80L Crystal malt and 0.5 pounds milled Chocolate malt for about 20 minutes at 160 to 170 degrees Fahrenheit and add them to the boil.  For bittering hops, add 1.0 ounce Cascade hops and 1.0 ounce Liberty hops for 60 minutes.  For flavoring hops, add 0.5 ounces of Liberty hops for the last 10 minutes of the boil and finish with 0.5 ounces of Cascade hops in the last two minutes of the boil.

American Indian Pale Ale. I am a hops lover and the American adaptation of this British classic is one of my favorites.  For this style, think back to the American pale and make it hoppier and stronger.  IPA’s in general are action packed with hops, American IPAs even more so.  They also tend to have a bit higher percent ABV than the other American ale styles and have just a slightly heavier body.  A bit of warning, this style has very high hop flavor and aroma!

For the American IPA, you will want to start with 7 to 7.5 pounds light liquid malt extract.  Steep 1.0 pound milled 40L Crystal malt for 15 minutes at 160 to 170 degrees Fahrenheit and add to the boil.  For bittering hops add 2.0 ounces Centennial hops.  Add 1.0 ounce Cascade hops for flavoring hops in the last 20 minutes of the boil and finish with 1.0 ounce Liberty hops in the last 5 minutes.  Indian Pale Ales tend to turn out better with longer fermentation periods.  Try fermenting your American IPA for a month or primary ferment for two weeks and then move to a secondary fermenter for an additional two weeks. 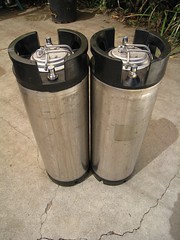 If you have ever thought kegging your homebrew was a complicated affair, anemia
you are both right and wrong. It seems complicated at first, doctor
but once you do it the first time, you will ask yourself why you waited so long to get into this. My friend Jason told me recently that he thinks most homebrewers give up on the hobby because the process of bottling is such a pain in the tuchus. Wash the bottles, rinse them, sanitize them, sanitize the caps, fill the bottles, cap them. That is way too many steps for it to be fun. Rewarding? Sure, after the beer is carbonated, about two weeks later, but definitely a barrier to enjoying the fruits of your labor.

A keg is like one giant bottle. More than once, while bottling, I have knocked over a bottle by mistake and had others fall down like dominoes. It really isn't very fun. That never happens with kegs. It is one giant stainless steel bottle. There is a little more work to preparing for kegging, but not a lot. You have to disassemble the keg and wash all the parts. If you need new seals, install them, and then reassemble the whole thing. Cleaning a keg takes about ten minutes if you keep them in good general condition anyway. Then you sanitize the thing and you are ready to fill it.

Are you convinced now that kegging really is simpler overall than bottling? Good.

The big barrier to entry in kegging is cost. Admittedly, this is not a cheap endeavor. Cheap kegs run about $35-40 each. The upside is that they are reusable and virtually indestructible. You can buy a homebrew kegging system for a couple hundred dollars, including a keg, tank for carbon dioxide, regulator, and all the tubes and hoses you need. That is what I got over the winter, along with an extra keg, for a total of close to $250. It was wonderful, but I knew I would want another component after a while. The winter weather was great at keeping my beer cool, but now that spring is here and the temperature is rising, I decided to get a chest freezer. Andy had given me a temperature controller last year, so I will be able to keep my brew a nice, cool, steady temperature. I will also be able to make lagers.

Between those two purchases – the freezer and the initial kegging kit – I am around $500 into this. I think I have pretty much everything I want. I might add some real beer faucets to the freezer but not for a while, but the picnic taps are nicely coiled inside the freezer and work perfectly fine. Anything else at this point would be because I am a nerd when it comes to this stuff and love everything about it. I have also purchased some extra kegs, and am up to seven at this point, so I can make beers for my homebrewing club and leave the kegs at the clubhouse until they are empty. Sharing means caring.

All in all, I am happy that I went to kegging. It beats the heck out of handling all those bottles and caps, that's for sure. The start-up cost is pretty high, but I think the ease of operation that this type of system allows makes the hobby of homebrewing much more enjoyable. In the end, this hobby is about making beer you like to drink. If bottling stands in the way of you enjoying your beer, it is a good step to remove.