-Steep honey and additional spices for 45 min.
-Specialty grains steeped at 150 deg for 20 min.
-mix together and add extract. 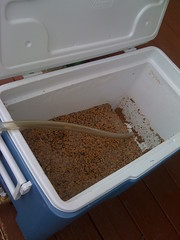 Here are my top ten uses for spent grain:

Let's face it. Having brew day and baking day on the same day is nuts. If I were going to save my spent grain, I would put it in small sandwich bags and keep it in the freezer. Overnight in the refrigerator might be fine for a few days, but all that water and residual sugar that is left in the grain make it a great growth medium for molds and bacteria.

You could also dry the grain by using a dehydrator, but baking in the oven probably can be tricky, as even the lowest oven setting can change the chemical composition of the grain. However, you may love that roasted grain flavor, and if you are careful this can be a great way to go about it.

What are your uses for spent grain?